On a recent January weekend, I attended the Kasparov Chess Foundation camp taught by Garry Kasparov himself !  As most of you would know, Garry was the 13th WCC, and previously held the record of the highest rating ever achieved (2851).  It was a tremendous privilege, and honor to actually see, and meet Garry in person!  When he walked into the training room, and I laid eyes on him for the first time, I felt an adrenaline rush through my body.  Garry radiated such a powerful aura!  I grinned in total awe, wondering if my eyes were betraying me.  Was I really seeing one of the greatest, if not the greatest, chess player of all time?  Well it was finally time to get down to business, and he began cracking down on all of our games.

It was incredible to see how sharp and astute he continues to remain in his calculation and understanding, despite being an inactive player.  I was so excited when it was my turn to present my games to him.  After asking about my background history, Garry was ready to roll, and so was I 🙂 .  I absorbed each of Garry’s comments with the utmost reverence.  I felt this was chess knowledge and wisdom right in front of me.  I was not gonna let this opportunity just pass me by.  When I finished my presentation, I was so pumped up.  It was incredibly motivating listening to his ideas and thoughts on my game.

On Sunday, we had a “Study Quiz,” moderated by Garry himself.  For those of you who don’t know what Studies are, they’re long forced sequences and usually impractical, which end in an elegant and beautiful manner.  They require the Solver to use what I call an “Counter-Intuitive Thought Process,” which basically means that the Solver has to think about non-intuitive moves 🙂 .  I had never done this before, and apparently It helps in developing precision.  It took me a ridiculously long time solving these, as I wasn’t used to this method of thinking, and was only able to solve one such study out of four.  I’ve posted the solved one below.

If you think you’ve solved it, just write a comment and I’ll validate your response 🙂 .

After the Studies, Garry was kind enough to sign my boards, and “My Great Predecessors” books (guess who the author was 😉 ) as well!  Overall, it was a thrilling and satisfying weekend.  Meeting the legend has fueled me with more hunger to get better, and to follow in the footsteps of Mr. Kasparov himself. 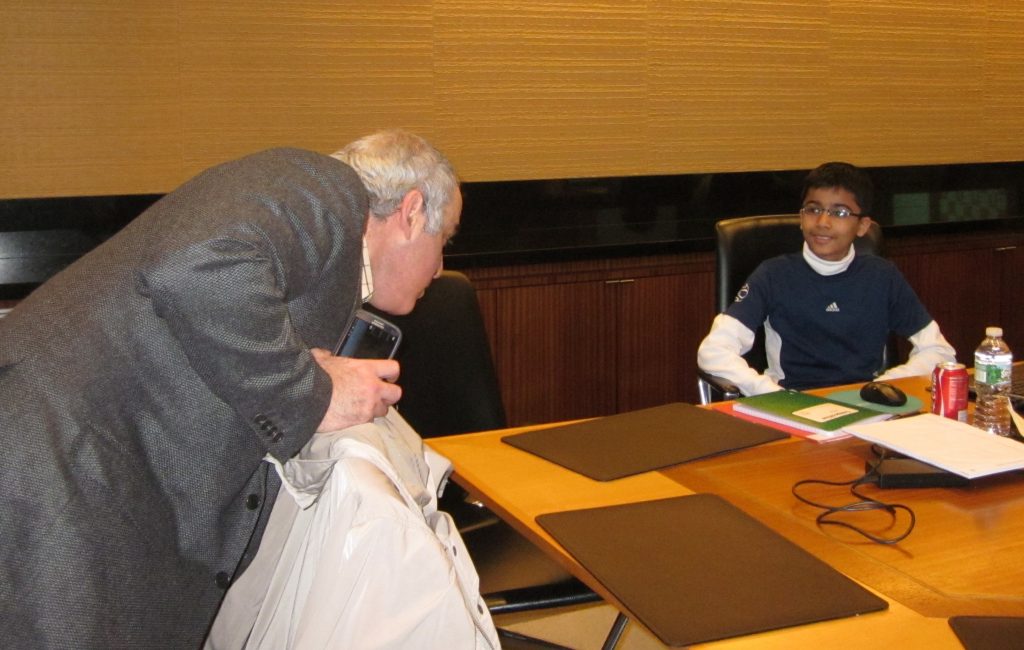 12 replies to "Meeting the Legend for the First Time"